During mid-August’15, I much enjoyed as UNICEF Representative in Timor-Leste to make my first visit to Oe-Cusse, which is an enclave located 80 km west of contiguous East Timor, surrounded by Indonesian West Timor, comprising about 15 per cent of Timor-Leste’s territory.  Timor-Leste is the second youngest country in the world, and is faced with multiple  development challenges.  Nearly half of its population is younger than 18, and about 70 per cent of the population live in rural areas.

﻿﻿
Wherever I worked for UNICEF - whether in Cambodia, India, Laos, North-Korea, Sierra Leone, and Sri Lanka, or now currently in Timor-Leste - visiting our work on the ground is very helpful to understand the challenges faced by our supported programmes. In particular, it helps me to better plan and monitor our concerted efforts towards contributing to an equity focused future for children and their families.

“Eskola Foun”: a model of child-centered education
Such a pleasure to participate in the festive hand-overs of two new school buildings under the UNICEF-supported Child Friendly School initiative, the construction of which was financially supported by Australian Aid. There were several songs and performances by the children themselves, while speeches were fortunately kept relatively short.

Child Friendly Schools (CFS), known as “Eskola Foun” in Timor-Leste, provides a comprehensive package of quality education services, which help to transform traditional schools into CFS. “Eskola Foun” demonstrates that a school is much more than just a building. It promotes not only child-centered teaching-learning and improved school management, but also safe and healthy school environments including water and sanitation facilities, along with  active participation of the community through Parent Teacher Associations.

During the visit I also had the opportunity to participate in a large planning meeting of all School Directors in Oe-Cusse. Before the meeting started we talked with some of the school directors, and one of them told me that he was keen to be part of the Eskola Foun initiative. As he mentioned: “Eskola Foun is not only helpful in making sure that schooling is more effective and meaningful, but it also contributes to making learning much more interesting for children. If children enjoy, they learn better, and if they learn more, access and participation improve, and importantly their learning achievements. ”

Initiative to make and keep communities “Open Defecation Free”
One of the highlights of my visit was the opportunity to observe in the village of Bihale an interesting, and surprisingly amusing, participatory exercise towards making communities “Open-Defecation-Free” in Oe-Cusse.
The exercise was very compelling, and at the end the community collectively expressed its keenness and determination to change their behavior. They also committed themselves within a time span of only two months to fully stop their open defecation practice by building and following up on usage of latrines by all community members.
Children indicated that if needed they would remind their own family members about using the latrines followed by hand washing with soap, the field level activities of this initiative are supported and monitored by the Ministry of Health in close collaboration with some  national NGOs and UNICEF for related training and follow-up.

An unusual household
Another highpoint of the visit was an unplanned encounter with a small remarkable  household consisting of only two sisters and one brother.

We met them while monitoring the UNICEF supported public stand pipe scheme receiving water from a gravity-fed water system in the village of Boacnana.  These double public water taps, which were built with community support, appeared to be in a good condition and supplied sufficient water to all the 165 households living in its surrounding area. These type of water systems are managed by community water groups, who not only ensure efficient operation (in most cases opening during 6– 8 am and 15-17 pm on a daily basis), but also regular maintenance.

The siblings we met with were Grandiana de Oliveira (16) and Flavino Kuetene (15), both in grade 9, as well as with Amelia Kuetene (13), who is the youngest sister in grade 7 of Basic Education.  When I asked to meet with their mother or father, Grandiana, the elder sister rather proudly mentioned “Here we are living totally by ourselves. Our parents are farmers and are living in Citrana, a village about 5 km from Boacnana. They live there with two of our younger brothers.”

While the three siblings live during the week days apart from their parents because of lack of schooling possibilities at their level in Citrana, during the weekends they commute back to their own village to be with the rest of their family. They do however have one of their aunts also living in Boacnana village, who keeps an eye on them and whom they can contact in case of any urgent need as she lives on nearby walking distance. “Everybody is quite surprised. We are not only doing well at school, but we are also able to  manage almost everything by ourselves, including our own meals,” said brother Flavino with a sense of pride.

It was fascinating to hear each of these three teenagers talk about their commitment to continue their study while aiming for a good job in the future.  While Gradiana referred to her keenness to become a doctor, her younger sister Amelia hoped to become a professor. Flavino was not fully sure yet, but indicated that his aim for the future is to help with keeping his country and his family safe and secure.
The children praised not only the taste of the water but also how helpful it is to have a water facility close by. They compared it with the far away water system at their hometown Citrana, where fetching water would involve each time a walk of  a distance of almost 1 km. 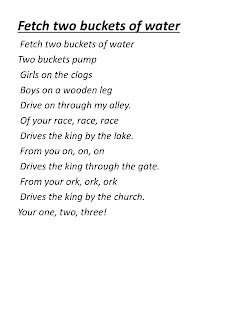 “Twee Emmertjes Water Halen”:
A Sudden Youth Memory
Just before leaving, the two sisters invited me to join them in fetching some water, because they had just finished their classes and would start preparing  their evening meal together soon. Flavino mentioned that while his sisters were good in cooking, he himself was a great dishwasher.

While waiting with the girls for the two buckets to fill up at the water tap point, I suddenly remembered a very old Dutch folk song titled “Twee Emmertjes Water Halen” (translated “Fetch Two Buckets of Water”), which I much liked during my own youth.  I briefly sang that folk song for them.
Initially, they looked at me as if I was a bit crazy, yet when I explained through my translator the meaning of the song, they liked it. I also told them about the earlier popularity of using a yoke while having to carry two buckets.

They immediately indicated to be strong girls themselves who could easily carry their buckets, though they were quite happy when I helped carrying the buckets back to their place.
﻿

Before departing the girls also pointed out being very happy with the latrine built with community support close to their place, so that compared with their own home village they do not have to practice anymore open defecation in the bush. “Having a nearby latrine is not only handy, but also being new in the village, we feel it is much more safe for us, especially in the evening and night,” said Amelia. She also pointed out that washing their hands - with soap – every time after usage of the toilet was very easy with the water tap nearby

Back to Dili
The travel back to the capital Dili on the next day involved multiple border crossings and breathtaking landscape views, and gave me ample time to reflect on this interesting and fruitful visit to Oe-Cusse. A visit, in which I further grasped the many challenges posed to the young nation of Timor-Leste. Challenges not only in the area of education or  water/sanitation, but also in other important social development related areas, such as child protection, health and especially nutrition. Yet, for the moment  I returned from this visit with renewed energy, while fully realizing the power of tapping the huge potentials of communities themselves towards not only reducing disparities but also towards widening horizons.